The Eurotunnel and the scope creep.

The halo effect and the corporate pyramid

In project management, the wrong perception to rate a team member high or low in all the knowledge areas, based in a brilliant performance in some specific area is called the “halo effect”. For example “If you have a good performance in the technical areas you should be good in management tasks”.

This wrong perception could lead many problems, because a team member could be promoted to a role where he didn´t receive specific skills training or where he hasn´t be introduced gradually.

Let’s take an example a good programmer has prominent career with a brilliant performance. This leads to suppose that he will have a good performance in management skills. For this reason he´s promoted to a management role. But he never managed teams, prepared schedules or budgets and he never deals with the senior management. For this reason after certain time this person fails in his new position and many times this person finally leaves the company. This means that a wrong promotion could leads to burn and lost and excellent employee.

And why this needs to keep promoted forever? Because with every promotion has associated more responsibility and as a result a wage increase. This hierarchical organization is called corporate pyramid. 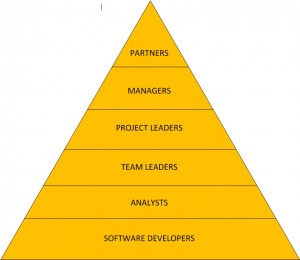 The IT Consultants companies should provide to his employees with a good chances to get a quick growth in the company but working hard with overtime and with the sacrifice of accept new challenges.

Where is the problem in this type of organization? The pyramid could not grow forever and could collapse.  In order that an employee can grow around the organization, the company needs to expand and the pyramid move forward. During crisis periods where there are not many clients and projects it´s difficult to promote the staff. If the Projects Managers not promote to managers the Team Leaders not will promote to Project Leaders and so on.