What is a conflict?

Conflict is some form of friction, disagreement, or discord within the project team or stakeholders. 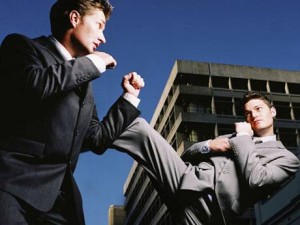 In a Project Environment conflict is inevitable. Some project managers could feel uncomfortable dealing the project conflicts. But the conflict it´s not necessary bad and could provide an opportunity to improve.
Formerly the conflict was considered something to avoid, that was produced by personally differences or leadership failure. But now is consider something inevitable caused by organizational interactions, that could be beneficial and is resolved identifying the causes and problem solving by people involved and their immediate managers.
The success of project managers leading their teams depends often in their ability to solve conflicts. Successful conflict resolutions lead in a productivity improvement and best relationship between project team.

Conflicts are inevitable because:

The project manager must to deal with these conflicts to ensure the correct performance of the team and the project meet the goals.

Some recommended actions to try to avoid the conflicts are:

But what are the main source conflicts? According to the four edition of PMBOK, the main seven conflict reasons are listed below:

And a conflict becomes personal when the root cause it´s not resolved. The fifth edition of the PMBOK these conflict reasons are not mentioned.

The factors that influence in the conflict resolution are: